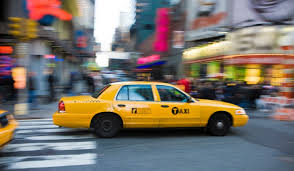 Last week a bunch of my friends got stuck in downtown LA because of the taxi protests. They said it was absolutely nuts and I was so thankful I took a yoga class after work and missed the chaos. I remember a few months ago I took a taxi from the airport and my driver told me how Uber was really hurting business. I asked him why he didn’t just opt in to drive for Uber. Because he has a commercial driver’s license, he can drive as an Uber Black Car and charge more. He said his taxi service doesn’t allow it because it’s considered competition. I understand why a taxi company would make that a rule and I can definitely understand the hesitation a driver might feel when choosing to leave a secure and regulated company for this new system. However, there are SO many perks of the Uber system and it can really pay off for former taxi drivers. I get the fear though. Change is scary but it’s always worth it in the end. Look at Blockbuster and Netflix. When was the last time you went and spent $6 for a 3 day movie rental? That being said, Uber’s not going anywhere. And if you can’t beat them, join them. Read why here!