Tomorrow I turn 25, a year that’s been sort of brooding on the horizon for some time now. It goes way back.  When I was 22 trolling the Newport Beach bars with Stephanie and company, 25 was this mystical year in which our drunken nights, mindless beach days, and personal freedom would be a thing of the past. You see, we got lucky after college: landed awesome houses on the beach, got good jobs that allowed us for the first time to have more money than time, and were embracing the single life the way few people can. But at 25 we figured this would all be gone. At 25 we might be married the way our parents had been, we might be over going out every night, and we’d most certainly be over the adult-frat life of the Newport Beach peninsula. 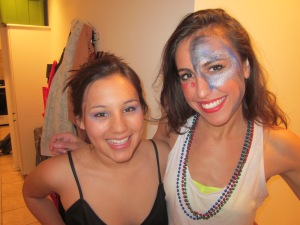 But at 24 not much had changed: we had the same jobs and were being conditioned into the work-before-dream lifestyle that is considered the norm for the twenty-somethings of today. The bar and party scene, though tedious, was enough to keep us generally entertained, and I had a boyfriend who, though he didn’t love me the way I wanted to be loved, loved me the best he could.  Despite the seemingly perfect lifestyle, I found myself working hard to stay happy: everything from making sure to get my vegetables and vitamin D, sleeping early during the weeknights, working out in the evenings, and trying to do all that smile like you mean it stuff that all those self-help books teach you.  It feels good to work for something, especially something like happiness, yet this chase did not alleviate my growing fear of the future.  When we talked about twenty-five, my attitude had changed.  25 was now a terrifying a year: a turning point with the potential for stagnancy.

Life has a way of tricking you into an idea coined as the pursuit of happiness. Though I’ve always been a generally happy person, there was always this yearning for something more that could not be solved by any sort of compensation and distraction.  Something important was missing.  So as I counted my days to each weekend, allowed my paychecks to keep me grounded, and wasted time fixing a relationship doomed to fail, I started to realize this pursuit was a huge problem.  If I was constantly pursuing happiness how would I ever find the time to be happy?  So I decided to give up on that nonsense and stopped trying to be happy.

So now here I am at 25 and I am stoked.  You see, I realize that until recently I had maintained a horrible pact with myself: to never allow myself to be really happy.  I called it different things: responsibility, financial stability, routine, thankfulness, and appreciation for what I had.  When I broke the pact I realized these were all actually the same things: fear.  I was terrified to go for the things that would make me happy and fail, I was afraid of missing out on things, I was afraid that what I had was the best I could do.  The more I let that fear take hold the more powerful it became until all I had was the pursuit of happiness: the hope that if I changed nothing, something would changeWhen I stopped trying to be happy, I saw it was all a lie.  And now, at twenty-five, everything has changed.  But the change doesn’t really matter once you’re in it.  The thing I learned is that happiness doesn’t live in the future.  It lives in the present.  That means happiness isn’t something you can chase.  It’s something you only have to accept, and at twenty-five I realize that all great things are.