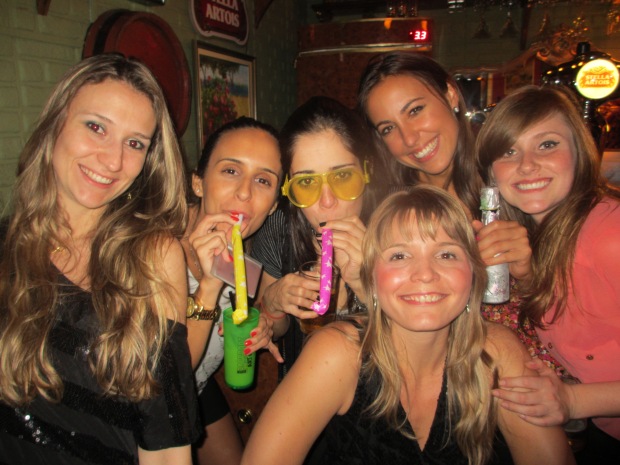 I’m ordering dinner with my roommate now.  Then, it’s round two for my first weekend in Sao Paulo.  Before I tell you about last night / this morning (they ran together), I need to tell you what I accidentally had for lunch.

Cristiana and I went to an all you can eat Arabic place.  I ate a ton, because it was delicious.  I’ve adopted a don’t ask method for picking food.  It’s safer when in a foreign country.  My logic — if they can eat it, I can eat it (unless there are raisins).  So…what did I eat that is making me feel sick now?

Or, at least that was my first thought.  I’ve been sick a few times since I’ve been here and haven’t been able to figure out why…and then I went to the sink and filled up my cup of water.

“You aren’t going to drink that are you?”  my housemate asked.

“What.” I responded, dreading her answer.

“Have you been drinking the tap water?”

She sort of hesitated and then carefully replied, “And you haven’t been sick or anything?”

All questions were answered.  Today I learned a very valuable lesson: don’t drink the tap water in Brazil.

So, now, going backwards, the night.

We started drinking grape juice and vodka with shots of whiskey.  I was hammered by midnight, when we went out.  We went to Casa 92, a house that is turned into a crazy club.  It was nuts!  There was a kitchen room, a dining room with a fireplace, and outdoor backyard area.  You can tell it was a really popular place.

We got some drinks (I ordered a mimosa and a shot of tequila), and started to dance.  Brazillians love music and they love dancing.  The whole place was crazy!

Also, all those rumors about Brazilian men are true.  They are so complimenting, so crazy abrasive.  They kept asking me to kiss them.  One guy wouldn’t leave me alone and I told him I had a boyfriend.  He said he had a girlfriend.  I told him he was gross.

My spanish helped ALOT.  For the people who didn’t speak English, most spoke Spanish.  I want to work on that more when I get home.  It’s so useful to be able to communicate.

I was drunk, but I kept thinking about how cool it is that Nick let’s me do stuff like this.  Not that I ever let someone “let me” do something, but you know what I mean.  I have a fat picture of my conversation with Brian (or any one else for that matter) before a night clubbing in Brazil.  I’m pretty lucky Nick trusts me.

There was a guy from…where was he from….damnit I can’t remember.  Holland maybe?  No idea.  Anyway, there was a guy from somewhere else who spent a lot of time hanging out with us.  He kept telling me I have charisma.  He told me that I was too young to be in Brazil with a boyfriend.  I told him to stop touching my arm because I was getting grumpy and I get mean when I’m grumpy.  He said I was too serious.  I got pretty annoyed.

I feel like my bucket list for Brazil is pretty complete (minus Rio).  I wanted to see how people live here.  The books are true.  They eat a lot of fruit.  They work a lot, but they party the entire weekend.  The people love music and appreciate their culture.  The people know there government has problems, but they don’t hate it.  They recognize this is a time of change, and they are okay with the mistakes and problems being made by people in authority to get them to where they need to go.  In a way, they trust the country as a collective whole.

However, they don’t trust me.  The girls I’ve met are desensitized to the relationships.  They kiss like they give hugs.  They take risks, but don’t let themselves get attached.  Everyone cheats, they say.  I don’t like that.  I think it’s sad.  I’m glad I didn’t come here last year.  It wouldn’t have been good for me, after wasting that much time with Brian.

Also, everyone is welcoming.  People will go out of their way to make sure you are safe.  There is an understanding between friends that’s pretty rare.  Everyone watches out for each other, even if they aren’t super close.  It’s nice.  It makes me trust people a lot…because I know they trust me.

I’m going to Woods tonight with Cristiana and her friends.  It’s a Brazilian country music club.  I’m excited to hear a different kind of music!

I’m trying to figure out my flight home too.  I want to make sure I’m home before Nick’s birthday…and I’m scared I won’t be.  I want to leave a few days earlier than I have originally scheduled, but I don’t know if that’s going to happen.

Whatever though.  I’m happy, even if it is scary sometimes.  I know everything’s happening and working towards something, and I’m okay with not knowing what it is.